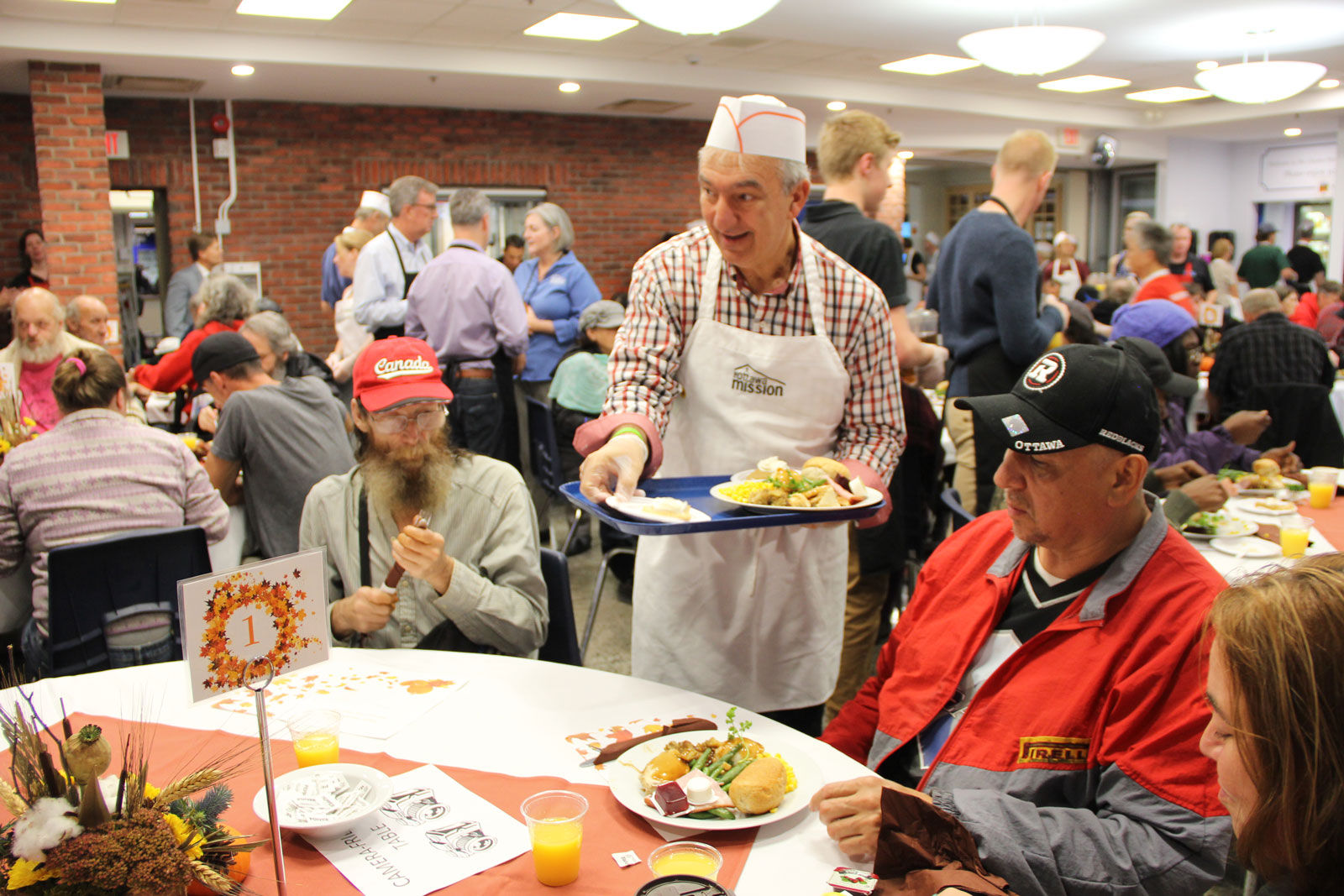 Ottawa, ON – As we head into the fall, planning is well underway for The Ottawa Mission’s annual Thanksgiving Dinner, which will take place on Monday October 14th, from 11:30 a.m. – 5:00 p.m. at 35 Waller Street, Ottawa.

On any given day, the Ottawa Mission serves over 1,450 meals to shelter residents and those in need in the community. During Thanksgiving, The Mission will provide 2,000 – 3,000 meals for this special occasion for those who would otherwise go hungry.

“It takes between 80-100 large turkeys, or about 2500 pounds of turkey, to feed everyone who comes to our special Thanksgiving dinner,” says Chef Ric Watson, Director of Food Services at The Mission. “Our kitchen volunteers and staff are working very hard to ensure that to ensure everyone will have a delicious turkey dinner by preparing for this very special event in advance.”

In addition to warm and nutritious food, the Thanksgiving dinner provides a sense of shared community and fellowship to those in Ottawa who may otherwise not only go hungry, but also find themselves alone.

Frozen turkey donations can be dropped off anytime at The Ottawa Mission’s front desk, located at 35 Waller St. Arrangements can also be made to have donations picked up by calling 613-234-1144, ext. 248. 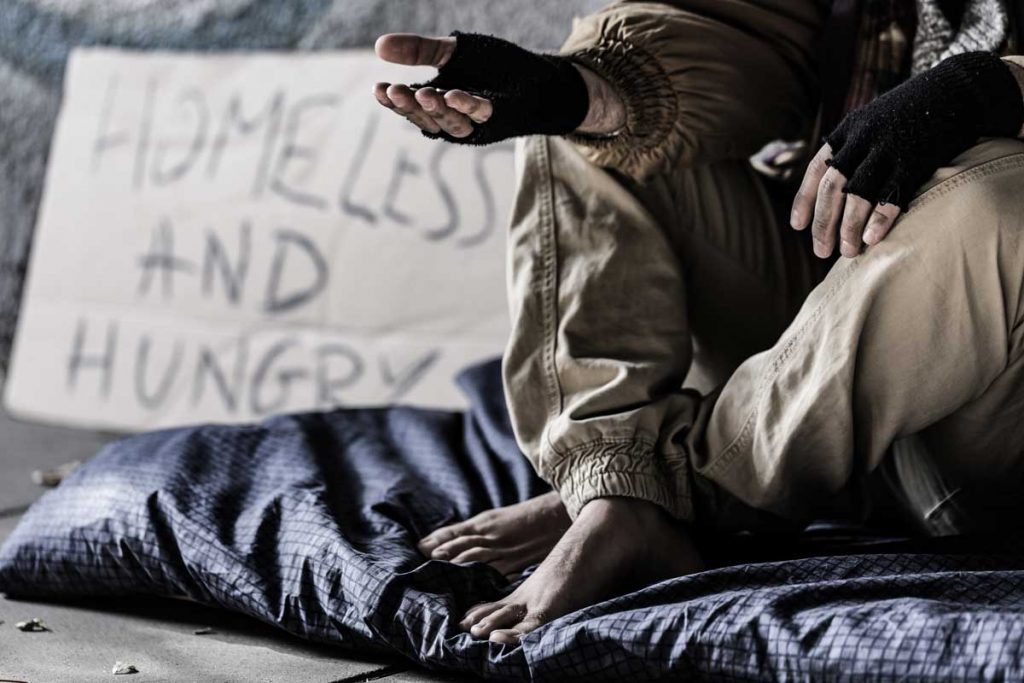 “In a reasonably affluent city like Ottawa, these numbers are shocking,” noted Ottawa Mission Executive Director Peter Tilley. According to the Ottawa Food Bank, since the 2008 recession, the numbers of food banks and clients accessing them have increased by almost 30%. Furthermore, in 2018, 53,600 Ottawans were food insecure, but only 37,524 accessed a food bank in any given month. Many people are not able to access a food bank when they need to because of available resources, transportation issues, or shame.

Poverty is a major determinant of both homelessness and food insecurity. While poverty rates across Canada and Ottawa have declined recently, this trend has not benefited marginalized and vulnerable populations. According to Canada Without Poverty, poverty, homelessness and food insecurity have a disproportionate impact on those with physical or mental disabilities, who identify as Indigenous, are racialized, seniors, female single parents, and children. These conditions, in turn, further negatively impact health and wellbeing. All of these constituencies use the Mission’s community meal program.

“Given this very disturbing increase in hunger, we urge all levels of government to consider how their policies affect vulnerable populations to ensure that they don’t fall further behind. Poverty reduction, addressing and preventing homelessness, and food security must be urgent priorities,” Mr. Tilley concluded.

May 6 – 13 is Mental Health Awareness Week in Canada. Last year, we profiled Robyn Henderson, a Social Worker with the Canadian Mental Health Association (CMHA) who has worked within the Ottawa Mission for the past three years delivering intensive case management to clients dealing with long-term homelessness and severe mental illness. This week, we provide an update on her important work.

For clients who have spent significant periods of time in shelters, independence can be a daunting process. Robyn works hard to build rapport and earn their trust. One of Robyn’s most remarkable success stories is securing and maintaining housing for these clients. This achievement is critical as the Mission moves to implement the pillars of its new strategic plan, including enhancing its focus on securing and maintaining housing for its clients. Last year the Mission housed 230 people.

According to the Auditor General of Ontario, over 50% of people within Ottawa’s emergency shelters have reported a past diagnosis of mental illness, a number far higher than that of the general population. Clients with persistent mental illness face significant barriers to care and support given the impact of their illness on their understanding of their situation and the stigma that surrounds both mental illness and homelessness.

“Securing and maintaining safe and affordable housing for individuals living with severe mental illness and who have lived in the shelter for many years is challenging. Apartment vacancy rates are very low and it is difficult to find private landlords who will take part in affordable housing programs. The need for low barrier supportive housing and subsidized apartments is immense resulting in long waitlists. I consider it an honour to help navigate the path to independence for these clients and support them on their journey.”

Imagine what life would be like if you had nowhere to go, no place to call home. That would be hard enough. But it’s even more difficult when you’re sick.

People who are homeless or at risk of becoming homeless bear a much higher burden of disability, mental and physical health problems and addictions. Before the Ottawa Mission opened its primary care clinic, those who were homeless often ended up in emergency rooms if they were sick. We are now expanding the clinic to enhance our ability to provide care to those who are homeless and allow us to treat up to twice the number of patients within our new space.

At our clinic, operated in partnership with Ottawa Inner City Health, nurse practitioners provide compassionate and evidence-based care for our community’s most vulnerable.

Carole has been a client of The Mission’s primary care clinic since 2007, when it opened. Before that, she didn’t have a family healthcare provider and was instead relying on drop-in clinics. Carole visits the clinic once a month. “The service at the Mission clinic is incredible. The staff are very friendly, welcoming and thorough. They get things done, including referrals for tests and other follow-up care. They’ve also pointed me in the right direction for additional supports. At the clinic, I know I’m getting the best possible service. I have a lot of anxiety, and the clinic has a very caring atmosphere that alleviates fear. I know all the staff, and, for me, it’s my safe place,” Carole notes.

This week is National Nurses Week, and we applaud our wonderful colleagues.

Ottawa, ON – During the Ottawa Mission’s annual Easter dinner, which was held on April 22, the shelter served 2,659 meals to those in need in our community. On a yearly basis, The Mission serves almost 479,000 meals to shelter residents and members of the community at large.

In addition to warm and nutritious food, the Easter meal provides a sense of shared community to those who may otherwise not only go hungry, but also find themselves alone. On the menu was: 2200 lbs prime rib with horseradish; 2500 Yorkshire puddings; 2500 baked potatoes with sour cream; 250 lbs of glazed baby carrots; 250 lbs of peas garnished with diced roasted red peppers; 350 assorted fruit pies with whip cream; 50 gallons of gravy; and 100 vegetarian quiches.

Research suggests that two-thirds or more of people who are homeless are food insecure, greatly increasing their risk of serious physical and mental health conditions. “We are doing our part to support the most vulnerable in our community by keeping people healthy through our meal program,” said Ottawa Mission Executive Director Peter Tilley. With the reduction in other community meal programs, the Mission is monitoring how this may impact the shelter’s meal services.

“Over 100 dedicated volunteers and also our exceptional kitchen staff worked very hard to ensure that everyone had a delicious prime rib dinner. Our great frontline staff went the extra mile today so that all who entered our Mission could be accommodated. And special thanks to our donors and supporters who have been profoundly generous in their continuing support of the Mission. A huge thank you to all,” Tilley concluded.