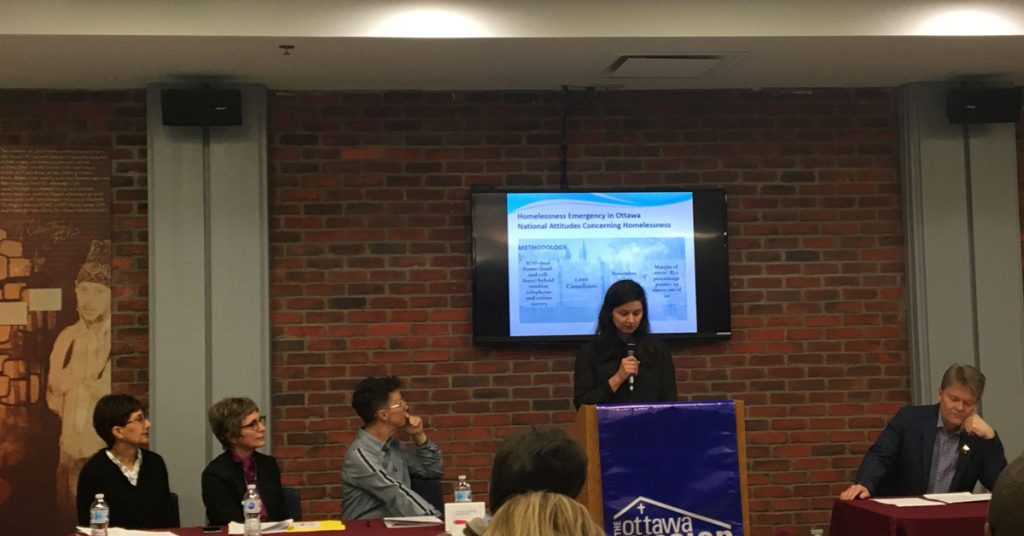 Ottawa, ON – As Ottawa continues to endure bitter winter temperatures, homelessness and healthcare representatives have come together at the Ottawa Mission to express their support for Councillor Catherine McKenney’s motion tabled at Ottawa City Council in December to declare an emergency concerning the worsening situation regarding homelessness. This comes as the Ottawa Mission released a national public opinion poll by Nanos Research on public attitudes to homelessness across Canada.

“The City of Ottawa prides itself on being a caring and compassionate city where people want to live, work and play. Safe, adequate and affordable homes are fundamental to this goal. Unfortunately, we’re moving further away from this vision. The situation concerning homelessness has moved beyond a crisis and we should call it what it is: an emergency which is putting people’s lives at risk,” stated Councillor McKenney, Special Liaison for Housing and Homelessness on Ottawa City Council. Councillor McKenney’s motion will be voted on by city council on January 29.

Ottawa Mission CEO Peter Tilley noted the worsening conditions for those needing help. “The city’s own review of its housing plan showed that instead of decreasing, shelter use increased by 6.5% and the waiting list for affordable housing by 14.8% in the last year alone. Shelters in this community are full and often operating at overcapacity. At the Mission, we’ve been operating at over 100% capacity for over 2 years, and it’s getting worse. We lay down 20 mats in our chapel each night to ensure that no one who needs help is turned away, but this is no solution in the longer term.”

Somerset West Community Health Centre Executive Director Naini Cloutier noted the harsh and harmful effects of homelessness on those experiencing it. “Safe, appropriate and affordable housing is key for promoting health and preventing illness. When very limited affordable housing options are available, people end up in poorer quality housing or homeless, which exposes them to additional health risks. Particularly concerning is the fact that 92 people in this city are estimated to have been sleeping outside this winter, and about 700 women were turned away from Violence Against Women shelters from April to December of 2019, often returning to unsafe circumstances,” Cloutier spoke on behalf of the Coalition of Community Health and Resource Centres, a network of 13 multi-service agencies.

Simone Thibault, Executive Director of Centretown Community Health Centre noted the disproportionate burden of homelessness on other very vulnerable populations. “Homelessness can affect anyone. In fact, according to the city’s own Point in Time Count, 9% of those who are homeless are in fact employed, a fact that illustrates just how limited affordable housing options are in Ottawa. However, in addition to women fleeing violence, the burden of homelessness is particularly acute for those who are the most vulnerable, including: refugee families; those who identify as Indigenous or LGBTQ; veterans and first responders afflicted with PTSD; and others.” Thibault spoke on behalf of the Alliance to End Homelessness Ottawa, a network of 55 housing and homelessness organizations.

Alexandra Apavaloae of Nanos Research presented the findings of a national public opinion poll that shows significant concern about homelessness across Canada as well as a strong desire to help. “Nearly 3 in 4 Canadians nationally indicated that homelessness has a serious or somewhat serious impact on Canada. Canadians are also very concerned about how homelessness affects those they care about: over six in ten said that they may be at some risk of being homeless. 50% of Canadians surveyed provide support to those who are homeless through donations, voting for those who have helped or promise to help those who are homeless, volunteering, and other methods.”

Mr. Tilley noted the real risk of the situation concerning homelessness if the situation continues to deteriorate further. “If the original goal of the City of Ottawa’s 10-year Plan was to reduce shelter use by 40%, then by now we should only have 5,150 people within our shelter system, working our way to 3,862 people by 2023. Instead, the total number is almost 8,000.  While governments at all levels have made strides under their individual plans and policies, these numbers show clearly that what we’re doing now is not enough. We cannot afford another course correction down the road: we need action now. And given the enormity and urgency of the situation, we need City Council to approve Councillor McKenney’s motion to support collective engagement with the federal and Ontario governments.”

“Ottawa has faced recent emergency situations as a result of weather calamities, including severe flooding and tornadoes which affected thousands of people. The current situation concerning homelessness in Ottawa is no different: it affects thousands of people, not only those who are homeless or at risk of being homeless, but also their families and the community at large through demands placed on public services such as social services, hospitals and police. Our community needs a response to homelessness that works, not only for those experiencing homelessness, but for all the people of Ottawa. Unless we work together across all levels of government, it will continue to get worse,” Councillor McKenney concluded.

Nanos conducted an RDD dual frame (land- and cell-lines) hybrid telephone and online random survey of 1,010 Canadians, 18 years of age or older, between November 29th and December 2nd, 2019 as part of an omnibus survey. Participants were randomly recruited by telephone using live agents and administered a survey online. The margin of error for this survey is ±3.1 percentage points, 19 times out of 20. The research was commissioned by the Ottawa Mission and was conducted by Nanos Research.