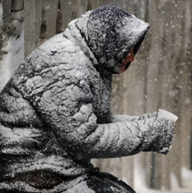 Already at Overcapacity, The Ottawa Mission Fears the Approaching Cold Weather
Shelter Urges Municipal Candidates to Commit to Funding Increases for Services to Those Who Are Homeless

Ottawa, ON – As the colder weather approaches and the need for emergency shelter for those who are homeless becomes even greater, The Ottawa Mission is urging all candidates for Municipal Council to commit to funding increases for services to those who are homeless to accurately reflect both the costs of providing these services as well as the increased need for services during the colder winter months.

“Moving into our new fiscal year, the situation is even more serious: Since May 2018, our average occupancy per month has never been below 100%, and the average occupancy for May through September 2018 was 107%,” Mr. Tilley added. The Mission responds to the overflow by placing up to 20 mats in its Chapel.

According to Ottawa Public Health, those who are homeless are among those at greatest risk of severe injuries and even death during extreme cold weather. At -15 C, hypothermia is an increasing concern and at -35 or colder, exposed skin can freeze in as little as 10 minutes. It should be noted that the average low temperature from November 2017 to March 2018 in Ottawa ranged from -14.2 C to -30.2C.

“Last winter saw brutally cold temperatures for weeks on end, which can put the lives of our clients at risk. We have the capacity to respond through overflow mats in our chapel, but this is no solution in the longer term” stated Mr. Tilley. “With some predictions of this coming winter being bitterly cold for 2018 – 2019, I fear for our clients.”

In March 2018, the Community and Protective Services Committee of Ottawa received a report concerning its 10-Year Housing and Homelessness Plan that committed to: 1) achieve 40% savings in funding to emergency shelters by 2024; and 2) reinvest these savings into prevention. Despite these goals, according to this report, “Ottawa continues to experience high demand for emergency shelter placement with the number of unique people requesting placement increasing from 7,167 in 2016 to 7,530 in 2017, representing a 5.1% increase. Further, as noted by the Alliance to End Homelessness Ottawa, despite efforts, we have not made progress in reducing homelessness since the Plan was introduced: from 2014 – 2017, overall shelter use, length of stay, and chronic homelessness increased by 16%, 12% and 21% respectively.

Although homelessness has continued to increase in Ottawa, according to a 2018 report by Deputy Mayor Mark Taylor, Special Liaison for Housing & Homelessness, “Emergency shelter per diems [for each shelter resident] have been frozen at $44.00 for approximately five years after having only risen slightly in prior years. Shelter’s costs are rising and they are trying to do more to break the cycle of homelessness by operating a range of programs and services, but often getting little or no public funding to do so.” The Mission estimates that the provision of emergency shelter, in fact, costs considerably more than the current per diem rate.

The Ottawa Mission currently receives almost 43% of its funding from the City of Ottawa, over 48% from the Ottawa Mission Foundation, and approximately 9% from other sources. While funding from the City of Ottawa has increased from $3.7 million in 2013-2014 to just under $4 million in 2017-2018 (less than 7%), funds raised by the Ottawa Mission Foundation to expand essential wraparound services to meet the complex needs of clients have increased from $3 million to $4.4 million (47%).
“The City of Ottawa is a close partner of The Mission in meeting the needs of our clients and we value the opportunity to continue to work with City colleagues to provide housing for our clients through Housing First, which connects people in emergency shelters to permanent housing with supports according to their needs. We are pleased to be part of the solution to homelessness working with our City colleagues,” notes Mr. Tilley. “In the past, the City rightly noted the burden on municipalities having to assume costs for community and social services offloaded by the province. The burden is the same for local charities such as The Ottawa Mission in the wake of City funding that has not increased in over five years.”

“For the past five years, the rate of inflation has varied between just over 1% to now almost 3%. Each year that goes by without an increase in per diems to reflect rising costs puts more pressure on emergency shelters to raise money to fund essential programs for our clients within an increasingly competitive charitable sector. Individual households would struggle to meet expenses without even a modest increase in wages and other supports. Emergency shelters face these same pressures without an increase in per diems,” Mr. Tilley added.

In the wake of these concerns, The Ottawa Mission is requesting all candidates for municipal council to commit to funding increases to:

“These requests are entirely consistent with Deputy Mayor Taylor’s recommendations within his March 2018 report. We welcome commitments from candidates thus far concerning affordable housing options and measures to address the factors that influence homelessness, and urge all candidates to make similar commitments to increase support for those who are homeless and those at risk of homelessness. This will benefit our clients and the community as a whole,” Mr. Tilley concluded.