A Son’s Inspiration… A Life Changed 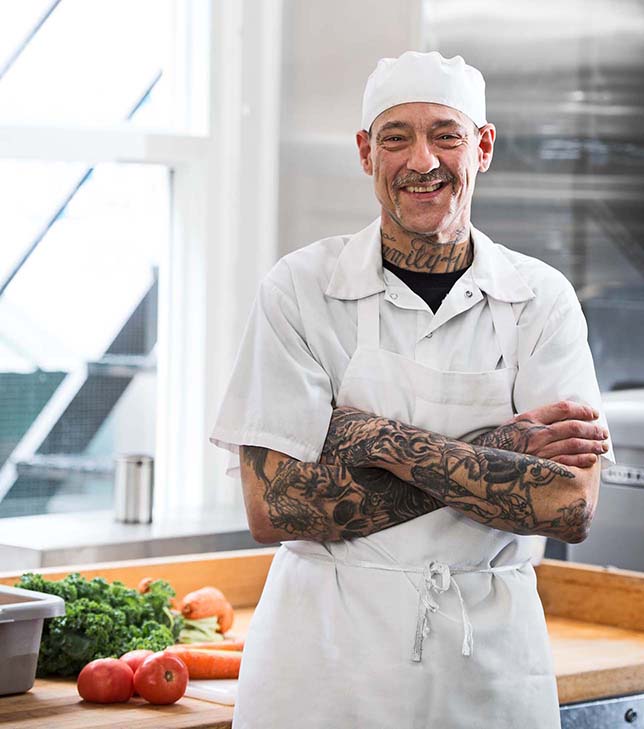 At 55, Chris is beginning a whole new life – one he could never have imagined even a year ago.

Chris’s adulthood was marked by addiction and trouble with the law.  Although he was college educated and had a good job, a number of influences – including a falling-out with his father, the sudden death of his mother, and failed personal relationships – led him to a life of drugs.

Thirteen years ago, Chris became a father.  As with most people, becoming a parent was life-changing for Chris, but he was not equipped – mentally or physically – to really embrace fatherhood because of his addiction.

Then one day his young son came up to him, put his hands on Chris’s face, and said, “Please stop what you’re doing.  I need my Dad in my life.”  Chris vowed to himself to conquer his addiction, and he was successful.   But Chris had a lot of difficulty finding work – he says not only because of his background, but also because of all his tattoos.

Last year Chris was on social assistance when his case worker told him about the Food Services Training Program at The Ottawa Mission.  Chris had always had a passion for cooking, so he immediately applied and was accepted – tattoos and all!

Chris is graduating from the five month program early in June, and is already working full time.  And we hear that his son will be front and centre at the graduation ceremony.  As Chris says, “I am so grateful to my son for being such an inspiration to me, and to The Mission for the training and encouragement they have provided.  I have a career now, and I have hope for the future.  And most importantly, I can provide for my son.”    Congratulations, Chris!