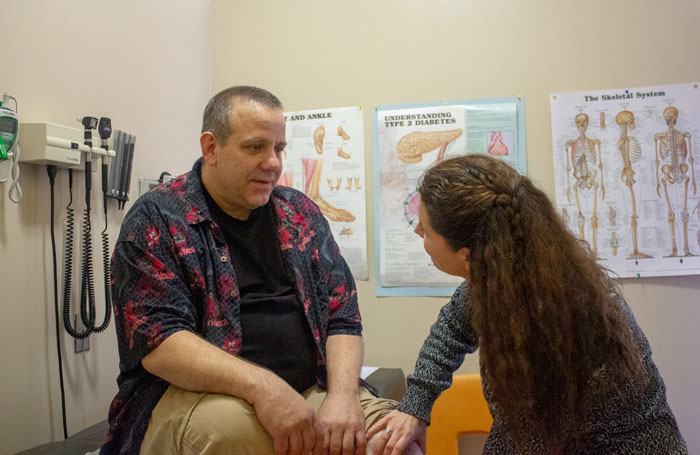 Colin has learned that inspiration can sometimes come when you least expect it.

Colin suffers from addiction, and has been in and out of the shelter system for many years. Last year, while staying at The Ottawa Mission, he had to have knee replacement surgery. After a short time in hospital he returned to the shelter. Almost immediately Colin’s recovery was stalled by complications with his wound. He was in severe pain, and the threat of infection was high. Our medical team immediately arranged a bed for Colin in The Mission’s Hospice, where he could receive 24-hour care in a more antiseptic environment.

Colin’s stay in the Hospice was his first source of inspiration. As Colin says, “The level of care, from both staff and volunteers, is amazing. I once witnessed a volunteer sitting with an unconscious patient, just holding his hand and playing soothing music, for hours on end.” With expert care, Colin was able to leave the Hospice in 8 days – which was important to him because he knew there were others who needed the bed much more than he did.

Every day for the next eight weeks Colin went to The Mission’s on-site Primary Care Clinic where Nurse Practitioners cleaned and dressed his wound, and encouraged him every step of the way. They were Colin’s “angels of mercy” and his second source of inspiration.

With this double helping of hope, Colin made the decision to finally seek treatment for his addiction at The Mission, and he is well on his way. “I realized just how lucky I was to be in pretty good health, and to have received so much care and compassion. I made up my mind not to waste another day of my life.” Colin is filled with gratitude for all of the lifechanging support he has received – thanks to your generosity.