Building A Relationship Of Kindness 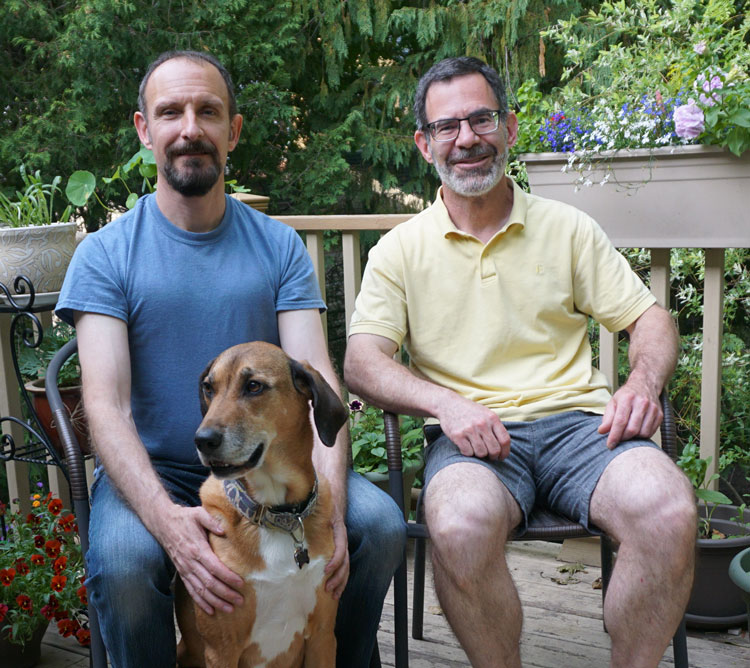 “Taking the five loaves and the two fish and looking up to heaven, he gave thanks and broke the loaves.” Matthew 14:19

Greg Huyer and Scott Rufolo met in England over 20 years ago after moving to Cambridge, Scott from the US and Greg from Canada. After finishing their studies in the UK, they moved to Baltimore, Maryland where Scott pursued a doctorate and Greg worked as a biomedical researcher. It was while living in downtown Baltimore that the couple regularly encountered people living on the streets and in local parks. Daily dog walks became opportunities for conversation with many homeless individuals.

“Encountering homelessness on a daily basis inspired us to act,” Greg says, “so we became involved in a program at our church called ‘Loaves and Fishes’ to prepare and serve food to the homeless in the inner city.” Greg and Scott moved to Ottawa 14 years ago. Their concern for the homeless continued once they settled here, and so Scott and Greg approached The Ottawa Mission as volunteers.

“We wanted to do something to help, and The Mission was an obvious fit,” Scott recalls. Greg began, as so many volunteers do, in the kitchen. Scott offered his support as a tutor with Stepping Stones. “We also became regular donors along the way. Our time as volunteers showed us how dedicated the staff at The Mission are, and how much of a difference The Mission makes in so many people’s lives.”

Scott and Greg have generously contributed a leadership gift to support the expansion of The DYMON Health Clinic, as well as a charitable gift in their wills. “We’re extremely fortunate to be in a position to support The Mission financially and we’re grateful for the relationship that we’ve built with The Mission over the years.” The Mission and its guests are eternally grateful for the generous support of kind donors like Greg and Scott. Thank you both!

If you would like more information, please contact Angie Kelly, Director, Major and Planned Giving at 613.234.1155 x 426 or by email at akelly@ottawamission.com.