A Place to Call Home at Last for Raymond 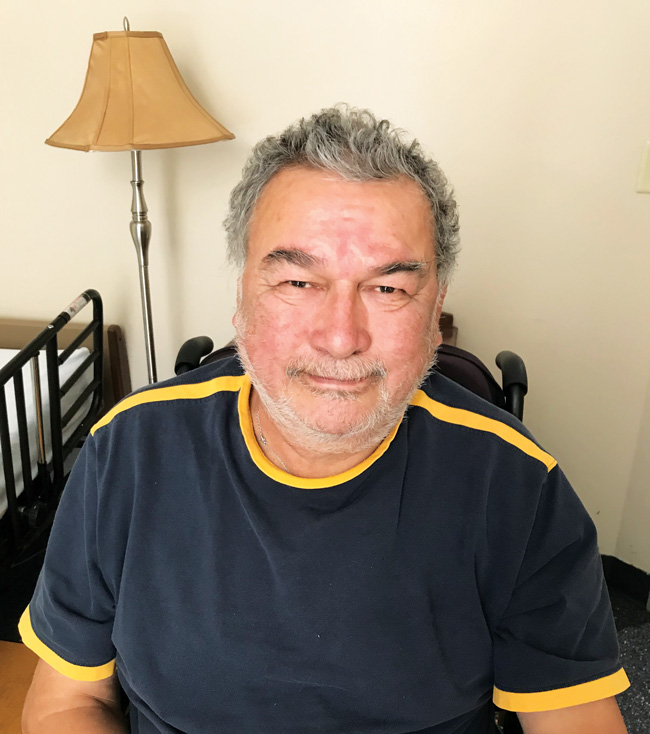 Raymond was a gentle and friendly 63-year-old man from a small farming community in Manitoba where he lived until he was almost 30. “We took care of the land, the garden and the chickens,” he remembered fondly.

When he was seven, his mother moved in with his new stepfather, a decision he called a “mistake”. His stepfather had a problem with alcohol, and his mother, who didn’t drink, began to drink too. Alcohol fueled fighting between the two of them, and also the beatings from his stepfather. “The days weren’t all bad,” he said ruefully. Raymond also incurred polio as a child, but fortunately recovered.

From a Cree background, Raymond’s mother ensured that he didn’t go to residential school but instead a regular day school. But that still didn’t protect Raymond against discrimination and abuse because of who he was.

After he left the farm, Raymond had a succession of jobs, including on a beef farm in Dauphin, sanding fiberglass rooves for buses in Winnipeg, and other jobs across the country. “I hitchhiked back in the days when it was safe to do,” he recalled with a smile.

Sadly, as he moved across Canada in search of new jobs, new homes and a new life, his own problem with alcohol ebbed and flowed. This affected not only his ability to keep a job, but also his relationships with his five sons, who live in different parts of Canada. “I don’t have a connection with them except my youngest,” he noted quietly with downcast eyes.

As Raymond grew older he developed heart problems as well as anxiety and panic attacks. After he came to Ottawa, he moved into the Oakes, a supportive treatment facility run by the Shepherds of Good Hope which has both a Managed Alcohol Program and an aging-at-home program. As his health declined further, he became unable to look after himself and moved into our Hospice, the oldest and largest within a homeless shelter in North America, in August 2020.

Hardship and tragedy continued to follow Raymond more recently: both his sisters passed away and his granddaughter perished in a fire. He found solace in his continued contact with his youngest son as well as his brother, who lives in Edmonton.

Raymond also found comfort and caring in the relationships he developed with Hospice staff. “It’s so quiet and peaceful here. There’s no pressure.” He has his own room and is provided 24-hour support. “The staff here are so accepting, likeable and helpful. Kevin helps me with my shower, and Pat runs errands for me to the corner store. I really appreciate it.”

Sadly, Raymond passed away on December 30. Through your kindness and caring, you gave Raymond the home he needed and deserved. Thank you so much for your support and compassion.